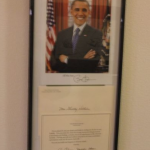 A few secrets of life prompted by a presidential card BY DOROTHY WILHELM It's Never Too Late - January 5, 2014 The mail recently brought the usual things: a few bills and a note from some organization called Funeral Alternatives reminding me that cremation is convenient and economical and asking me to “like” them on Facebook. Also, the president – of the United States, not … END_OF_DOCUMENT_TOKEN_TO_BE_REPLACED