minute to think what those little green creatures can mean in our lives. While we’re thinking, we should make cupcakes like the ones shown here on the right.  Just cut up red gum drops for tongue and red hots for eyes.  And in honor of the day, enjoy my News Tribune column about the brown frog that got stuck under my couch.

The Frog Prince  by  Dorothy Wilhelm 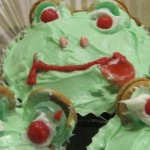 There’s a frog under my couch, an unmistakable sign of spring. I found him on the doorknob after I went out to pick up my paper this morning. As I reached back to close the door, the doorknob felt all soft and squishy instead of hard and doorknobby. I screamed and jumped up and down quite a bit as anyone would naturally do. While I was doing that, he hopped into the house, and under the couch.

Now I can’t find him. I’d rather not step on him. I’m sure he’d rather that I didn’t, too. This is not the adorable tiny Green Tree Frog who came in other springs.  This one is ugly, brown and big. At least two inches long. Practically a monster. I dug out my frog catching equipment: a plastic bowl, and a strip of cardboard. You simply upend the bowl over the froggy little body, slide the cardboard underneath to hold him in and escort him outside. Although I waited for hours, apparatus at the ready there was no sign of my visitor.

I know spring’s coming when the frogs arrive but there are plenty of other signs being reported, too. Right at this moment my oldest child and youngest grandchild each have a broken foot bone. Both were fractured in athletic pursuits. One was running (for exercise, not away) and the other was jumping off the couch.  (Couches figure large in our family.) When budding athletes suddenly need to go faster than their feet will take them, you can bet spring is on the way.

For some reason, spring is also the season your children may select to let you know how you’ve ruined their lives. I just learned that I blighted my son’s life thirty years ago.  I wasn’t really surprised. It is the function of all parents to blight their children’s lives at some time or another. You can count on it.  But my son had gotten to AARP eligibility without pinpointing any particular blight so I was beginning to relax and think I had gotten one right.

“I didn’t have a bed my last two years in high school,” he lamented on his last visit. Well, it’s perfectly true, he didn’t have a bed, but we didn’t play favorites. His brother didn’t have one either. They had perfectly serviceable camp cots in a jaunty shade of green. This was because they spent a lot of time wrestling and never stopped while there was a single shred of furniture left unbroken. When their beds were reduced to kindling, we decided not to replace them. It’s easier to replace a folding cot and the Ozark Trail Camp Cot was just $19 at the outlet mall.  You’d think they’d be appreciative of this thoughtful career preparation which must have come in handy during their successful years at sea in the Coast Guard and Navy. Since they were already used to teeny, tiny hard bunks they had a real, but apparently, under valued advantage.

It’s really unsettling for a parent to learn that their best efforts have left their children with permanent scars. We read all of the right books and raised the children as carefully as hot house flowers. Then it turns out there was no use worrying about it. They’re blighted anyway. Mine weren’t all blighted by the beds. One child blames embarrassment when I struck up conversations with strangers and another said darkly, “You kept coming to school.” I’m just lucky no one’s unfriended me on Facebook.

My friend, Ardie finally spotted the frog in a corner, finishing off a spider. We released him outside.  That’s good. I like everyone who comes to my house to have plenty to eat. Then I like them to leave promptly. Hospitality has its limits.

So far no princes have turned up on my porch and the naturalists at the Burke Museum tell me that even if a prince appears, I can’t keep him because you can’t own a human being. That’s ok  because that’s one unkissable frog. I’d think twice about any prince he produced. Never mind, it really is almost spring. Would I lie to you? Certainly not. It might blight your life.

Dorothy  Wilhelm is a professional speaker and humorist. Visit her website www.itsnevertoolate.com. Email her at