On this day in 1885, The Adventures of Huckleberry Finn was first  published in the United States. 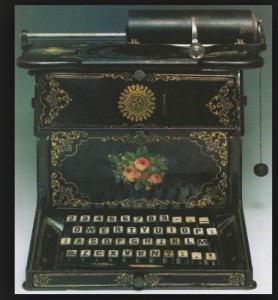 This Remington is the typewrite Mark Twain  said he used Mark Twain said that he had typed it himself and that it was the first book typed on a typewriter.  Mark Twain hated his typewriter.  I loved that book.

My mother read The Adventures of Huckleberry Finn aloud to me when I was confined to bed with the measles.  It took two weeks and that was just about right.  In a way, it was very lucky because I would never have read that book on my own.  The dialect made it difficult to follow, but my Mom, who never finished high school, read the whole book to me and made the characters come alive.  This book has come in for a lot of criticism in the last few years, but anyone who reads it with an eye to the times in which it’s set can’t help but be moved to laughter or to tears.  Growing up in Spokane,  WA, Jim was the only model of a black father I ever had.  It was unforgettable to read about how his little girl, Lizbeth didn’t respond when he told her to close the door.  Lizbeth didn’t respond and he hit her.  She stood there smiling at him through her tears, not understanding. 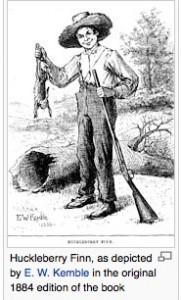 When the door slammed in the wind, and she didn’t move, he knew she was deaf.  Many years later, my oldest son lost his hearing (luckily reversible with surgery) and when I walked up to his bed in the hospital, he turned to me immediately, and I realized that he’d not heard me before.  I remembered that scene from Huckleberry Finn that night.

Now you could celebrate the day by building a raft and sailing it down the street in front of your house – there’s bound to be plenty of water with the rain we had yesterday.  How about celebrating this special day by reading aloud to someone – just a little – from a book they’d never read otherwise.