On June 24 1997, the US  Air Force issued its famous report “Roswell-Case closed!” saying that there were not there were not and had never been flying saucers or alien aircraft as had been reported in June of 1947, fifty years earlier. Today is the anniversary of that No Aliens Here – Nope report – and I say they’re wrong.

In 1950 I worked in a Civil Defense aircraft spotting station. There were indeed 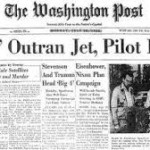 unidentified flying objects that came over on a regular basis and I’m not talking paper airplanes. We’d see them on radar, the interceptor planes would scramble, but never found them.  We were stationed with the Army at White Sands Missile Range, New Mexico in 1960.  Flying saucers were a daily sight, accompanying drivers over the Organ Mountains on their way to work and even being credited with causing car batteries to drain and cars to stop. I know my Navy flier son thinks I’m making it up, but I say they’re there, and I say it’s reason to celebrate.

Believe it or not, this is certainly a day to celebrate.  If there were aliens coming over your town today, how would you cheer their arrival?  How would you welcome them? I’ve got a whole bunch of little individual cups of jello in my refrigerator, which I think I’ll give aliens faces and serve for desert tonight.

Whether you believe or not, this is a day to celebrate! What shall we do?