When I was growing up in Montana we celebrated Frozen Food Day by burying food outside in the snow.

But then the bears (black and grizzly) would come and dig it up, and eat it, and look around for a person for dessert.  So my Dad built a cold box, and as far as I know,  that was the first household freezer.  You were supposed to hang up the food where the bear couldn’t get it. You picked a tree limb where the food could hang 10 feet above the ground and 5 feet below the limb of a tree, on a rope with a pulley. Where is the little fallacy here?  The bears were always either expecting to go into or come out of hibernation and they were crabby.  It just never worked out well.  Anyhow, imagine my surprise when I discovered there really is a National Frozen Food Day and it was not invented by a food production company. Ronald Reagan himself created National Frozen Food Day on March 6.  He did this on March 6, 1984 calling upon the nation to celebrate in appropriate ways. Don’t know 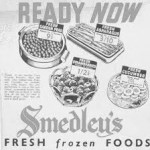 what that would be.  First frozen foods went on the market in 1930 in Springfield, MA.  Marketed by – who else – Clarence Birdseye.

This is also Dentist’s Day and White Chocolate Cheesecake Day. There may be a connection here.